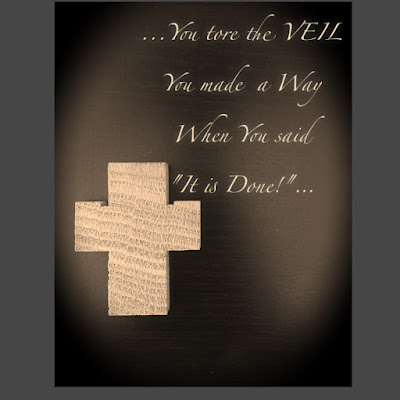 Easter is my favorite time of year, especially the Holy week leading into Easter.

The beginning of Holy week has inspired me to do some research and understand fully something that has always intrigued me about the crucifixion of Christ.

There is a part of the story recorded in 3 of the 4 gospels that speaks about the veil in the temple being torn in two, from top to bottom.

To be able to grasp the significance let’s take a look first at what exactly the veil represented in the Old Testament. The preparation of the veil, as part of the Tabernacle, was specifically given by God Himself in Exodus 26:31-34. The use of the veil was to separate the Holy of Holies, the dwelling place of God almighty from the sinful man. Don’t miss the significance of God actually speaking aloud to Moses telling him the exact directions for making it. It was important.

According to Exodus 30:10 and also echoed in the New Testament in Hebrews 9:7 the High Priest could only enter into the Holy of Holies, beyond the veil, once a year to offer a sacrifice to the Lord for the atonement of sins. If he went in any other time, or offered the wrong type of thing, He died, and the sins of the nation were not paid for.

It is in the chapters of Exodus and Leviticus we see how separated we were from our Holy God. Through much preparation and sacrifice and one High Priest doing it exactly as God commanded, did the people experience God’s forgiveness of sins.

Which makes Jesus Christ’s life-altering presence and ultimate one-time
for all sacrifice for sins such an incredible trumpet blast of an epic moment!

The moment that is recorded in scripture when Christ said from the cross “It is finished!” signified His ultimate and perfect sacrifice for the sins of the world. John 3:16 says “For God so loved the world that He gave His only begotten Son, that whoever believes in His name shall not perish but have everlasting life”.

When Jesus completed the work on the cross, there were several things that scripture records as miracles and signs that happened. One of which is that in the temple, the veil separating the Holy of Holies was torn from top to bottom- to signify that it was God who had removed the curtain for all to be able to have intimacy with Him and receive forgiveness of sins!


Christ made the way possible for our forgiveness of sins, for communion with God on a constant basis through in the indwelling of the Holy Spirit.

It changed from God’s dwelling place being in a room only accessed by a high priest to now God dwelling with us, IN us!

My fascination of the veil being torn is that is symbolizes my God loving me so much and that He wanted to have an intimate relationship with me, so He sent His Son to rip down the barrier between us so He could make His dwelling with me.

Words on a screen or paper cannot come close to expressing my gratitude for His saving me and loving me enough to send Christ and tear the veil away…. So He could be with me and I with Him.
Posted by Dana Hoebeke at 3/21/2016 02:48:00 PM