Forcing the appointing of your anointing 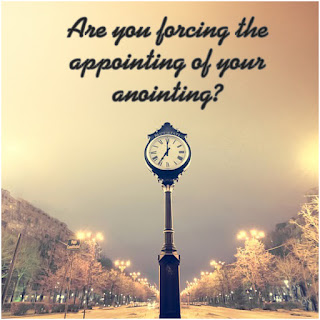 Do you feel anointed but that somehow you’ve missed the appointing?

If you think you are meant for the platform, writing the next best seller, or speaking life giving words to thousands but can’t handle taking your turn in the church nursery, you might have a problem.

If you are in the throes of motherhood and know you possess gifts that you sense God is going to use publicly one day, but can’t teach your children of Christ, you might have a problem.

If you are waiting for God to place you in front of the multitudes to teach but aren’t giving your best to leading a small bible study, you might have a problem...

In our Christian-ese, we use words like “anointed” and “appointed” to speak of the moment when God chooses us for some special calling and sets us into that place.

2 Corinthians 1:21-22 says “And it is God who establishes us with you in Christ, and has anointed us, and who has also put his seal on us and given us his Spirit in our hearts as a guarantee” This is applicable to all Christians. We are all called to do something or be something in the body of Christ.

Scripture has several characters that provide a glimpse into that picture and provide some good understanding to the concept of being anointed and then being appointed.

David is a famous example in scripture of being chosen (anointed) by God. He was just a boy out in the fields with the sheep. He wasn’t significant enough in his father’s eyes to call him home when the priest Samuel came. Once Samuel passed by 7 of the 8 sons and God clearly told him that none of these young men were God’s chosen...Samuel had to ask if there was any other sons.... enter the boy David...

David did not walk into the kingdom and take the throne the day of his anointing. He went back to work...in the field. He lived with his father longer, as a child (who had just been chosen as the next King)

He was willing to obey, to follow the Lord and do menial tasks and later, great big tasks.

He obeyed his father and brought food to his brothers on the front line of the war with the philistines.  His huge entry into spotlight was of course Goliath.

What happened before that though?

He learned to lead by having herds of sheep to shepherd. Not glamorous, not an impressive place on a platform.

His character and strength were built in obscurity, alone with the Lord and quietly in the field. He was being prepared for one of his many momentous occasions, forever captured on the pages of scripture.

David didn’t become a full-fledged King until he was 30 years old (2 Samuel 5). Some scholars believe it was a 15 year wait. 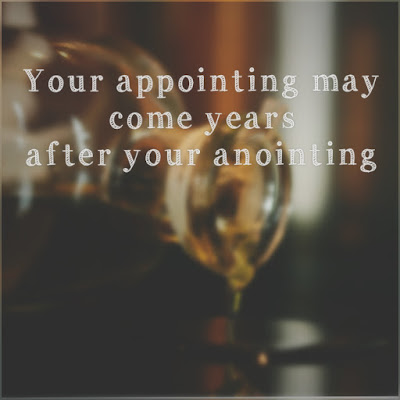 His appointing came years after his anointing.

Do we feel that God has chosen us for something, anointed us for a special calling?

How patient are we? How much faith in the Lord do we have? Do we expect to be whisked away to the height of that calling immediately? Do we get impatient with God’s timing, wondering when He’s going to “make it happen”?

How about this.... do we force the outcome? Do we push and make things happen? Go out and find the way and commandingly step out into the calling we are certain God has for us right this very minute?

Ever hear the saying “God helps those who help themselves”?

This is not scriptural. We certainly have  to participate in the kingdom work, but it gets abused by telling us to pull up our bootstraps, to go out and make it happen!

Our example of what to do is in the Word of God. He gave us all these biblical characters and their stories to show us how to do it. Just because we aren’t herding sheep doesn’t mean we aren’t cleaning the house, or changing diapers or driving kids all over. None are glamorous, but they are a perfect breeding ground for character building.

God may have told you that one day you are meant for something... chosen, anointed. However, you have some time before that appointing happens. You typically do not appoint yourself, someone higher up appoints you.

What was David doing in the in between time?
Still serving the Lord, it just looked different.

Sometimes it’s not a refusal to do the behind-the scenes work, but it’s just losing heart and being impatient.

Friend, God did not forget you. He didn’t forget that He chose you. He’s got you exactly where you are for a reason, your job is to listen to Him, surrender your will and find out what He’s got for you right in this moment. Don’t miss the blessing of right now because your dreaming about the appointing.

Each day has a set allotment of mercy, grace and blessings, scripture says it’s new every morning. When that day is done, its gone.  You get a fresh new crop the next day, but you won’t get yesterdays.

Use this time you are in to grow your faith in the Lord, believe He will do what He says, and trust Him for the outcome! His timing is always far better than anything we can fabricate or force.